The project is part of the 10th edition of Holstebro Festuge (Festive Week) 2017, created by Odin Teatret: The Wild West – Roots and Shoots: Re-think.

The Wild Island is a project of participatory art:

-an artistic installation on the river of the Danish city of Holstebro, a platform-stage made by six wooden rafts (each of 3,5m x 4,5m) built by the local scout groups. The platform will host works of local artists.

The theme of the next Festuge is the Wild West and the conceptual red thread of our Island will be the Wild Man; the wild side present in each of us, linked to instinct, to the totemic animal, the wild human still present in pagan rituals, in rural communities of various countries of the world, full of symbols which have the power to connect man with nature, with life cycles and seasons, sowing and harvesting, with the four elements. A wild man who exorcises fears and regenerates, blesses the community events.

Four fugitive poets are stranded on a raft. On their flight, they took with them whatever they were able to save. The raft is a refuge for their poetic imagination but also a prison on the water. They try to escape from the daily reality by throwing themselves into a chain of incongruous and ludicrous actions. A commotion happens when, every day, a local poet joins them with the latest news from the literary world and the newspapers. Surrounded by people who watch them as if they were wild animals, they communicate with the rest of the world by means of flying horses and bottle mail. Finally, they are rescued by Holstebro Boy Scouts. But they prefer to resume their flight in search of wildness and the alternative Nobel Prize.

The project is coordinated by Isadora Pei 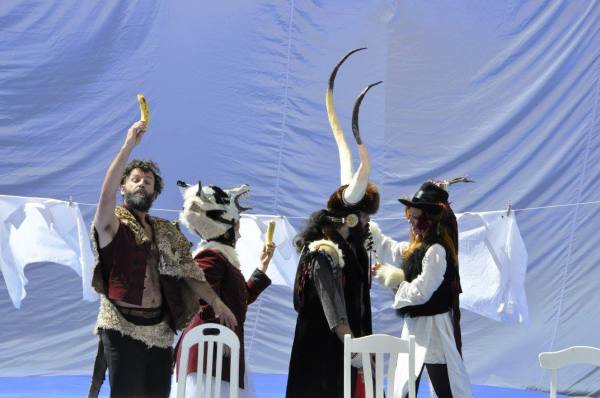